Built in 1980, by Main Iron Works of Houma, Louisiana (hull #352) as the Benjamin Foss for the Foss Maritime Company of Seattle, Washington, a subsidiary of the Dillingham Corporation of Honolulu, Hawaii.

In 1981, the tug was chartered out. Where she was renamed as the Vancouver.

By 1992, she was returned to the Foss Maritime Company of Seattle, Washington. Where she was renamed as the Benjamin Foss.

In 2012, the tug was acquired by Cook Inlet Tug and Barge Incorporated. Where she was renamed as the Nordic Wind.

In 2013, Cook Inlet Tug and Barge Incorporated was acquired by Foss Marine Holdings of Seattle, Washington. Where the tug retained her name.

In 2015, Foss Marine Holdings renamed the tug as the Benjamin Foss.

Originally powered by two, CaterpillarD-398 diesel engines. With CAT 7261 reduction gears, at a ratio of 4.65:1. Turning two, 76(in) by 76(in), fixed pitch, propellers. Mounted in kort nozzles, with flanking rudders. She was a twin screw tug, rated at 2,379 horsepower.

In 2016, the Tradwinds Towing Company re powered the tug with two, Mitsubishi S12R diesel engines. With Reintjes WAF 562 reduction gears, at a ratio of 6:1. Turning two, 76(in) by 76(in), four bladed, fixed pitch propellers. Mounted in kort nozzles, outfitted with flanking rudders. For a rated 2,600 horsepower. As well as outfitting the tug with an upper wheelhouse. 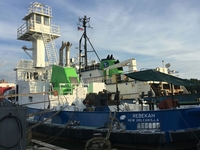 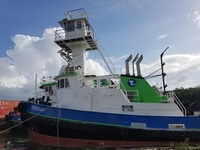