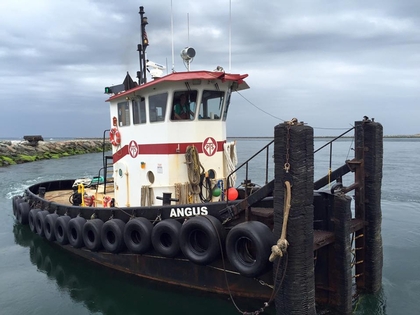 Built in 2001, by the Blount Marine Corporation of Warren, Rhode Island (hull #306) as the EM1022 for for the Express Marine Company of Sylmar, California.

In 2008, the tug was acquired by the Pacific Tugboat Service of San Diego, California. Where she was renamed as the Lillian G.

In 2015, she was acquired by SPS New England Incorporated of Salisbury, Massachusetts. Where the tug was renamed as the Angus.

Powered by two, Caterpillar 3412 diesel engines. With Twin Disc reduction gears at a ratio of 4.5:1. Turning two, 50(in), four bladed fixed pitch propellers. She is a twin screw tug, rated at 1,230 horsepower.