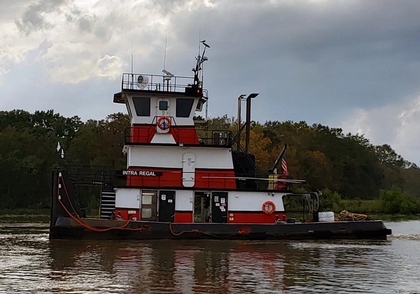 Pictured as: the Intra Regal (IntraTug) Photo by: IntraTug Incorporated

Built in 1977, by the Thrift Shipbuilding and Repair Company of Sulphur, Louisiana (hull #12) as the Louisianan for Conoco Incorporated of Westlake, Louisiana.

In 1993, the tug was acquired by Higman Barge Lines Incorporated of Houston, Texas. Where she retained her name.

In 1996, she was acquired by the Devall Towing and Boat Service Incorporated of Hackberry, Louisiana. Where she was renamed as the Lavvelle Devall.

In 2019, the tug was acquired by IntraTug (the Intracoastal Tug and Barge Company) of Maurice, Louisiana. Where she was renamed as the Intra Regal.

Powered by two, Cummins KTA19 diesel engines. With Twin Disc reduction gears, at a ratio of 5.17:1. She is a twin screw tug, rated at 1,200 horsepower.


Back to HIGMAN BARGE LINES INCORPORATED